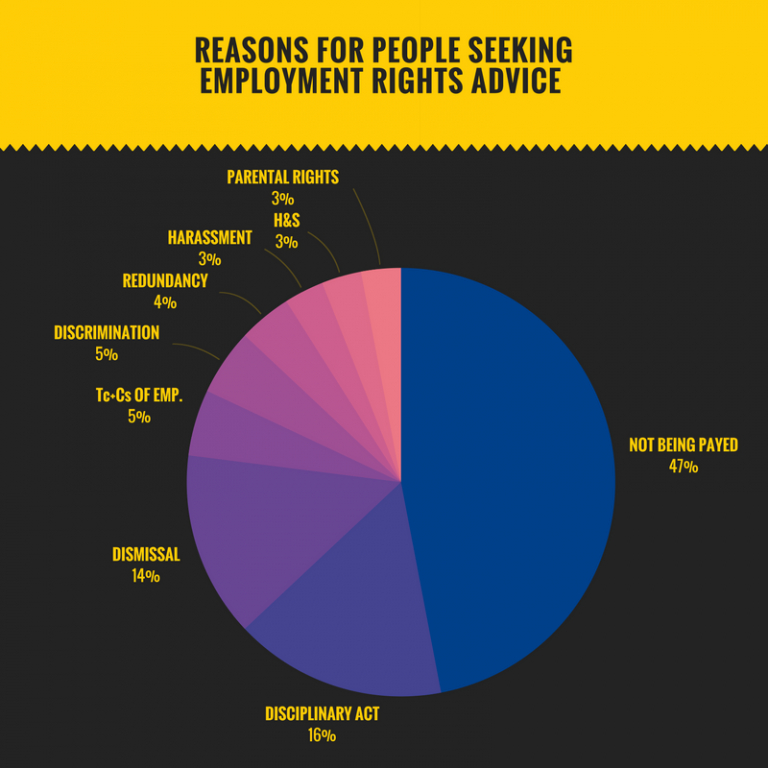 Confusion and lack of information about one’s rights at work is causing high levels of exploitation and unpaid wages in the Eastern European communities. Lack of language skills, lack of knowledge of the system and social exclusion make it harder for workers to understand their rights and makes it easy for unscrupulous employers to take advantage.

Such was the case of our client, S.

S came to us for advice at the beginning of February this year. She was working for an agency as a self-employed cleaner, as many Eastern European women do in London. Her last two invoices were not paid and the agency had withheld £250 to cover the cost of a Health and Safety training that never took place. The money that was withheld in total represented the value of her wages for a month.

S contacted them several times asking for her pay but they refused to speak with her. Eventually she came to our offices and we helped her with a letter requesting overdue payment but the agency did not respond. Consequently, we decided the best way to go further at that time was to make a Money Online claim. After this was made we supported her through all the court procedures.

After the claim was made S learned that she is not the only person in the same or similar situation. We found other cleaners who used to work for the same agency and experienced the same issues on a Facebook group.

Eventually, S won the case in the court but the agency still refused to pay her so we helped the client to enforce the judgement. Finally, after 8 months and two weeks she received the money.

S does not speak any English and when she came to us she did not understand what tools she could use to get her wages back. She was the only working person in the household, supporting her husband and her two children. With no savings she found herself in a very difficult situation. Without our support she would have probably gave up at some point like other members of the above mentioned Facebook group.

47% of clients approaching our employment law advice service are not paid. Withhold wages in many cases put our clients and their families at risk of homelessness.

We often highlighted that self-employed workers and agency workers are particularly vulnerable, as their employment status offers very few rights and protections and for whom there is little recourse in cases of abuse and exploitation.

We were invited to Special Camden Council Meeting on Brexit on the 23rd October 2017. It was an opportunity for us to raise issues that EU communities are facing in this uncertain time. We talked about lack of awareness among EU nationals about their rights and about sources of reliable support when things go wrong. We mentioned that lack of information about future status of EU citizens in the UK makes it even more difficult for them to understand their options. This confusing situation also opens door for labour exploitation.

Moreover, due to rise in number of hate crimes, many EU nationals do not feel welcome in the UK. Increased questioning by some employers and landlords who want to know if the candidates are already permanent residents amplifies this notion even though it should not be taking place.

We also talked about the pressure this situation puts on third sector support and advice services. Demand for our migration advice increased by 734% after the Brexit vote. We expect similar increase when EU nationals will start applying for a settled status. Considering the fact that the government says that e.g. job-seekers may not be eligible, it may not be as straightforward process at it is being painted now.

We asked Camden council to work with the third sector to support EU nationals living and working in that borough e.g. by organising information events and providing reliable information on its website. We also suggested that Camden council should use this opportunity to promote civil engagement and political involvement among EU citizens living in the borough. Many councillors declared their support for our ideas.

Webcast from the meeting https://camden.public-i.tv/core/portal/home

Last week, we talked at the Hate Crime conference in Brent, part of the Hate Crime awareness week. It was a great and interesting meeting, and we are grateful to have been part of it. It gave us the opportunity to think once again on how to tackle hate crime against the Eastern European community.

Taking into consideration that since the EU accession years – 2004 and 2007 – overall numbers of Eastern Europeans increased rapidly across all London boroughs and across the UK in general, this phenomenon was met with backlash from the popular media. Eastern Europeans were, and still are, portrayed as invaders from poor countries, often lacking skills and education but overall decent workers. This also created social tensions in local communities.

Because many of Eastern Europeans came to the UK with the intention of building their lives here with very little in their pockets, they were (and often still are) willing to take any job that provides an income. It created the spiral of exploitation and abuse, with many of our users telling us that it was ‘a migration deal’: “we are allowed to come over but we don’t deserve equal treatment.”

This phenomenon has been amplified by poor or lack of provision of any services that encourage integration of newly arrived communities, such as affordable English classes or career guidance appropriate for workers with different educational backgrounds. People often felt used as cheap labour, ostracised, being second class citizens. The longer the route to integration, the less confident and more anxious our communities become. In addition, the way of talking about our communities as a ‘problem’ (as in ‘we have problem with Poles in my council’) aggravate the sense of hostility and not being wanted. It undermines any reasonable intents of integration.

The Brexit referendum opened this wound up. Casual racism and xenophobia became explicit incidents, common in the most important areas close to a victim: at work, in school, in the neighbourhood. Eastern Europeans have been told they wouldn’t be paid and told to ‘f*** off to Poland’. Wages are being withheld and access to training and progression limited or cut off. In the words of one worker, ‘ships in Dover are waiting’.

Because racist or xenophobic behaviours towards Eastern Europeans have been so massively naturalised in these communities, it’s not a surprise that supporting victims to detect hate crime, articulate the nature of an incident and report to the police or other relevant body has been a real challenge for us.

But it has to be done. If our local communities are to live in harmony and understanding, Eastern Europeans need to be recognised as full members of local communities, therefore we need to work on eradicating hate crime and hate speech, and increase efforts to help newly arrived communities to integrate to British markets (labour, housing, education & schooling, health) as well as to help them to find a sense of belonging.