East European Resource Centre is proud to champion Eastern Europeans in London. In order to achieve that we need to understand issues, problems and opportunities that Eastern European Londoners have.

To help us with this task we carry research and develop evidence-based testimonies on how our communities live, work and integrate with the London diverse family. Research and testimonies, as useful as they are, don’t follow to impact and social change that we seek. For this reason our learning directly feeds to two of our functions:

+ is fed directly to our strategic plan so that our services can have desirable positive impact on Eastern Europeans and communities they live, and

+ is fed to our policy work so that we can influence policy and practice of the statutory, community and corporate sectors in order to achieve the best outcomes for Eastern European migrants

We conduct our own research into current areas of interest. We encourage universities, research outfits and think tanks to join forces with us – how to do it is described in our research engagement policy

We monitor and evaluate our work in order to see what works and whether there are emerging trends or gaps in provision. Evaluation is of fundamental importance for us because it gives us an opportunity to gain insight into all aspects of our delivery, test approaches and identify areas of improvement, from frontline delivery to engagement strategies to management structures. Evaluation feeds to our strategic documents as well as to policy work.

Users are our first and foremost stakeholders. Their feedback gives us copious amounts of learning about their needs. Most importantly, feedback tells us about needs that lie at the root of their problems, not only on the surface of their most immediate problems. We ask users to tell us, in their own words, what it is that we give them – text analysis of these statements has a potential to gain insight into people’s minds, deep rooted needs and ‘soft’ impact our work has. These things are difficult to capture through routine monitoring so we pay close attention to what users tell us.

Our learning then feeds into our policy priorities. We want to bring change not only to individual lives of Eastern Europeans. We want to have impact on broader policies and practice that all have impact on lives of our users and communities they live in. Through evidence-based testimonials, engagement in consultation and events, publishing case studies and speaking with people we hope to make a difference on local and regional levels.

Our current policy concerns gravitate around three main areas: work exploitation, welfare and immigration reforms and integration policies. Follow our blog, Twitter and Facebook to check what we advocate and how you can be engaged. 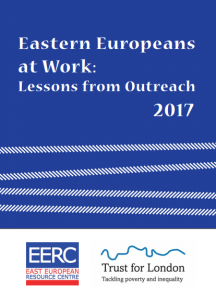 This report discusses the key findings from the outreach and information campaign we delivered
between April 2014 and December 2016. In developing the report, we used data we
have gathered during outreach events and other activities.

The main aims of the information campaign targeting Eastern European (EE) migrants in London,
which was funded by Trust for London were to:
+ raise awareness of employment rights among the Eastern European community,
+ provide information about various sources of reliable advice and support for people
experiencing issues at work,
+ reduce the exploitation experienced by the EE community. 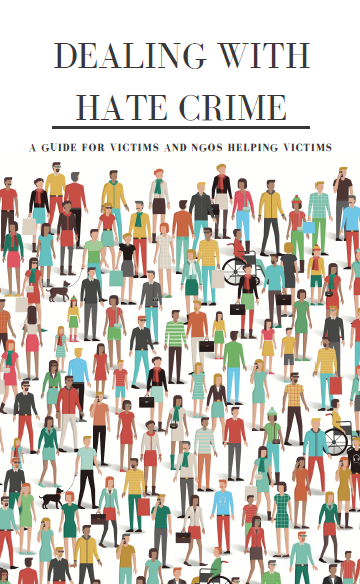 The Guide is available here: Dealing With Hate Crime March17

We have created a guide for victims and organisations supporting victims of hate crime. The guide describes victims’s rights, highlights police and criminal justice agencies’ obligations to take action, and provides good practice in reporting hate crime and supporting victims in the process.

The Guide has been written by our partner organisation UKREN within the project ‘Eastern European Hate Crime Advocates’ and co-funded by the Home Office and European Network Against Racism. 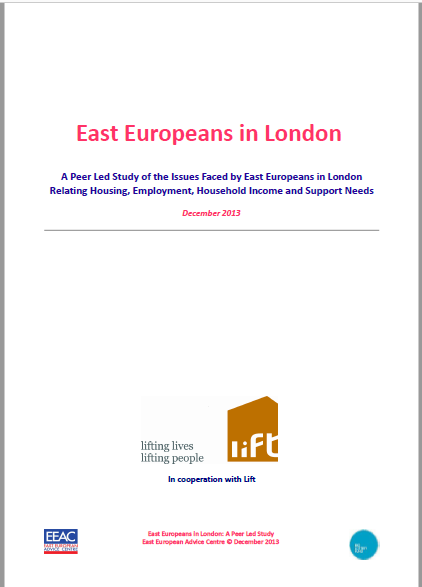 Close to the 10th anniversary accession of Poland and other A8 countries to the EU we set out to check how EU migrants from these countries live, work and make their living in London.

This is a study with a sample of 511 East Europeans in London, conducted by peer researchers – who were Eastern European migrants themselves, trained in social research methods. As a result, we received findings based on 455 questionnaires collected in May 2013 from A8 migrants approached on random in churches, deli shops, consulates waiting rooms, GP surgeries and hospitals, and other similar venues. Between August and November 2013 we followed that up with more in-depth interviews, consultations and focus groups. This study which, as a first of its kind, provides a snapshot of real life of ‘an average Eastern European migrant Londoner’. Please note that we didn’t engage our then users in this research.
The project was funded by the Big Lottery Fund.

2010 – Alcoholism within the Polish Community. Causes, Effects and Solutions

Following a number of approaches from external partners, in 2010 we carried out a research into alcohol problems among the Polish community in England. We carried interviews with nearly a hundred Poles, the vast majority of them young men, living in England. The outcome of the research was a leaflet designed to raise alert to the problems of alcoholism within the Polish Community in the UK, to provide information on the condition and the methods by which dependants can seek help. The leaflet was distributed to GP surgeries, police stations, schools and churches.

We conducted research into the needs of East European homeless people living in London. This research, together with evidence from casework, led to an innovative project we delivered in 2014 in cooperation with Lift. East European Peer Navigators aimed at preventing homelessness in the first place as well as providing immediate support to those recently arrived on streets.

Homelessness continues to be on the rise. Most recent statistics (Q2 2015) from London’s homelessness database CHAIN indicate increase of cases of rough sleeping among Eastern Europeans. According to CHAIN quarterly reports, the proportion of rough sleepers from the EU accession countries has grown from 34% in the period April – June 2014 to 36% in the period April – June 2015. It translate to increase of 18.2%. In the same period the overall number of rough sleepers in London increased by 11.2%. It indicates that the increase of the Eastern European rough sleeping population is significantly higher than of the overall rough sleeping population. It is linked to multiple factors, among them changes to welfare and housing eligibility. We are particularly interested in pathways to homelessness among families with children and older people – our workload shows that these groups are particularly affected by restrictions to accessing welfare aid. Watch this space for new research we will be developing soon.

2005 – The East European Elderly in Hammersmith and Fulham

In August 2005 we carried out a research project into the needs of elderly, disabled and housebound East Europeans living in the borough of Hammersmith and Fulham. The Urban Partnership funded the project.

This research led to the elderly befriending project, further developed into outreach-based tailored advice and advocacy. We are currently evaluating the activities but we already know that Eastern European elderly people are facing very difficult times. Our casework indicates that retrospective reviews and restrictions on older migrants’ welfare will lead to massive increase of cases of destitution, homelessness and exploitation. Older Eastern Europeans are increasingly put in the situation where they have to return to gainful employment just to sustain themselves. Often living in London alone, often abandoned by their younger generations that moved after better opportunities, these people not only face illness, cold and isolation. They face regular destitution and homelessness. Current system of financing homeless services will exclude them as migrants not eligible for housing support. The system has to change if thousands of Eastern European older people are to stay housed and live life in dignity.